Crazy roads, and more importantly, untrained winter drivers out there. If you have to drive, put chains on your car. If you don’t have chains, it’s not important enough to drive anywhere.

I got out to one of the downtown bus stops at about 4:30pm today. The first two buses to show up were packed, so I walked farther downtown so that I could get on. Got a seat on the bus and it then took almost two hours to get past Sears and the Krispy Kreme. Many people were fed up with waiting on the buses and I joined them in walking back to West Seattle. I feel for the people who were stuck in their cars. It was actually kind of fun getting to walk with a huge pack of people back from downtown. The people walking were in generally good spirits and were fairly entertained. I think it ended up taking me 3 hours to get home from one of the last stops downtown to one of the first stops in West Seattle.

Drivers at the West Seattle lower bridge on SW Spokane are routinely spinning their tires very fast thinking it’s going to help them get up the hill. In general, this just melts the snow and ice which makes it even slicker for the next person in line. With chains, you’re fine. Without, you would pretty much have to wait at the bottom until the hill is clear and then get some momentum going and keep constant speed the whole way up. Don’t slow down. Don’t stop.

A couple guys with a 4×4 pickup and chains on all four wheels were charging $20 to haul people up the hill. They’d haul one up, then back down and pull up the next one. Some people who were helping out stuck drivers were angry about this. I do know that they beat the professional towing companies to the lower bridge by a couple hours, and even the pros didn’t stick around.

There were enough interesting things going on that when I got home, I put on my bike helmet and a helmet liner, put my camera in my backpack, attached my tripod to my backpack, and rode my bike back to the bridge for some footage and photos.

Stay warm out there. 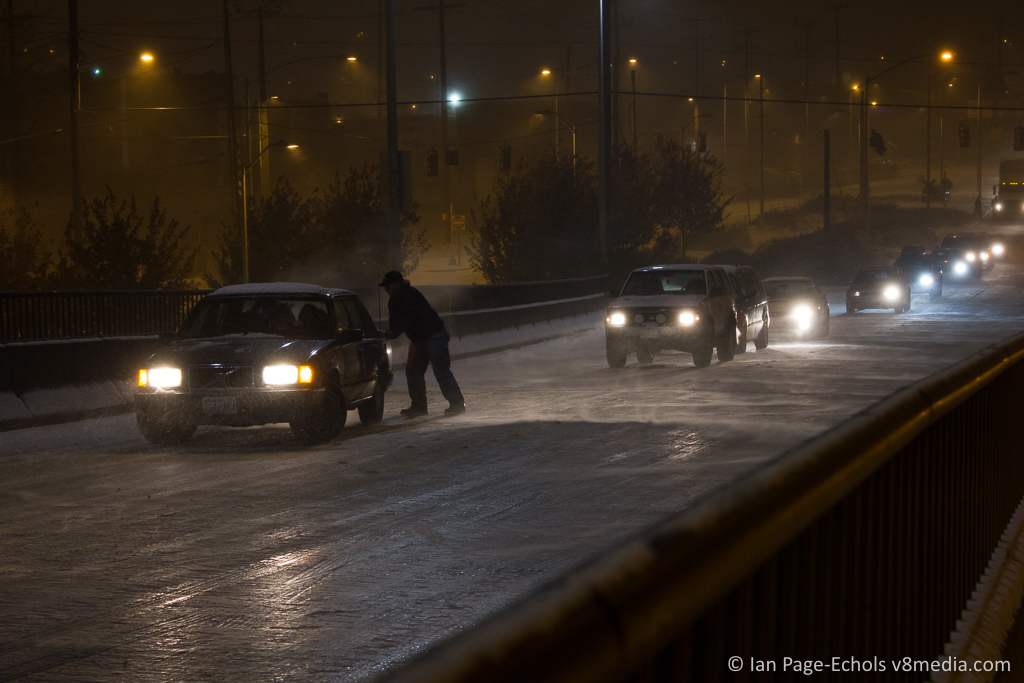