I took some of my video hardware over to the Monster Planet show at ReBar July 18th. This is a short rundown of what I brought with a short description of how each contributes to the whole.

On the table are two 3TrinsRGB by Gieskes, as well as two companion Comparator circuits by FetidEye. These can all be patched back and forth with each other using breadboarding jumper cables. The 3TrinsRGBs are video synthesizers built from kits. Instead of putting out audio waveforms, they put out video waveforms. The little wires on the top of them can be used to connect various parts of them to other parts. For instance, there are two oscillators in each that I can use to control, for example, the blue signal, with a sin audio wave. Depending on the speed, this can be a screen that fades from black to blue and back again. Turning it faster starts to result in patterns based on that waveform. 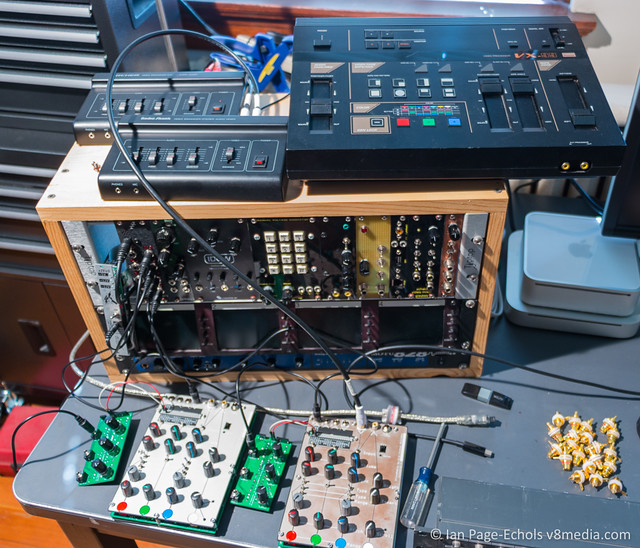 In the main case is power, then an Expert Sleepers Silent Way ES-3 being controlled via an old MOTU 828 audio interface. The ES-3 is pretty much an audio interface. I can send 8 audio signals out of my computer to eight different destinations. These can be either normal mono audio, like a drum or synth track, or they can be generated waveforms, like a sin or triangle wave. I’ve also used this box to control my old Minimoog using it as a control voltage (CV) output box.

An unrelated spring reverb, an audio distortion unit, and a diy sequencer with telephone buttons that I’m putting together.

In black is a recased Sima video unit with some additional controls. I’ve done this both to take up less space, and to allow different controls than the original unit. In general with really cheap analog video “enhancer” type devices, the lower the setting, the darker and glitchier the image gets. When the signal is higher, the picture gets brighter and often the color balance changes.

On the bare circuit board is a recased Radio Shack Video Enhancer, also with some additional controls. This is the same type of unit that is sitting on top of the case in one of the other photos. This has similar qualities to the Sima unit, but every one of these has different results. 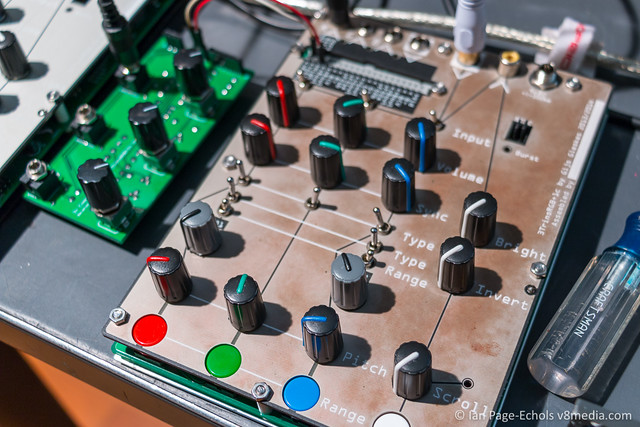 Next is a Raspberry Pi which is housed in a slim panel in order to be used as either a video source, or as a control voltage source. It can be used to play back video clips, spinning 3d shapes (which I rarely do), audio waves, and really anything a computer can output. One favorite of mine is the ability to play back a video clip but instead of making up an image using pixels, you instead use font characters to build an image. Something like a live action matrix text effect. Limited, but can be fun.

Clearly labeled to the right of that is a Schele Video Mixer by Gieskes that I built from a kit. There are more modifications that can be made with these, so I’ll likely reconfigure it in the future.

On the far right in copper is a Karl Klomp Dirty Video Mixer. This is an extremely basic do-it-yourself (DIY) project that pretty much just connects the jacks to and from each other with no additional circuitry. This tends to be extremely glitchy.

On top are two more Radio Shack Video Enhancers that I will likely make into modified modules at some point, and an old analog video mixer from Sansui.

I have a lot more video mixers and video devices that I’d love to bring out to shows, but they take up so much room. I did visuals this last month with almost this exact setup with the exception of a different video device instead of the Sansui. 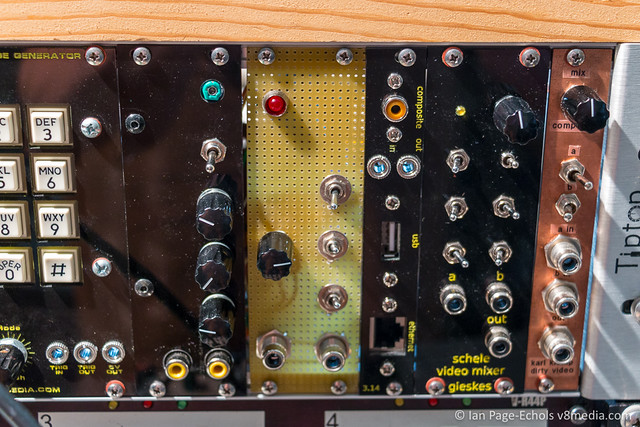